My role was to redesign Contact us page and help the business reduce phone calls to Contact Centre. I’ve partnered with researchers, developers and managers to enrich customer support. This was achieved by giving the customers' ability to solve their problems without the need to call the Contact Centre. We incorporated a chatbot on the page which lead to a more personalised and interactive experience for the users. This change helped the company save the cost of customer support.

AO, formerly known as Appliances Online, is an online-only retailer operating in the UK, Germany and the Netherlands. It specialises in household appliances and consumer electronics.

To comply with a non-disclosure agreement, I have omitted any confidential information. The information provided in this case study is my own and doesn’t necessarily reflect the views of AO.

This started as a project for a Hackathon that the company runs every year. Software developer Simon Cragg came up with the idea to create a voice assistant that enables our users to ask product related questions or for help and advice. During the Hackathon, we created a working prototype, and were given an award for this idea. The company was interested in investing in the future development of this idea. The business saw this as a potential to improve customer support by promoting self-help functionality on the website. 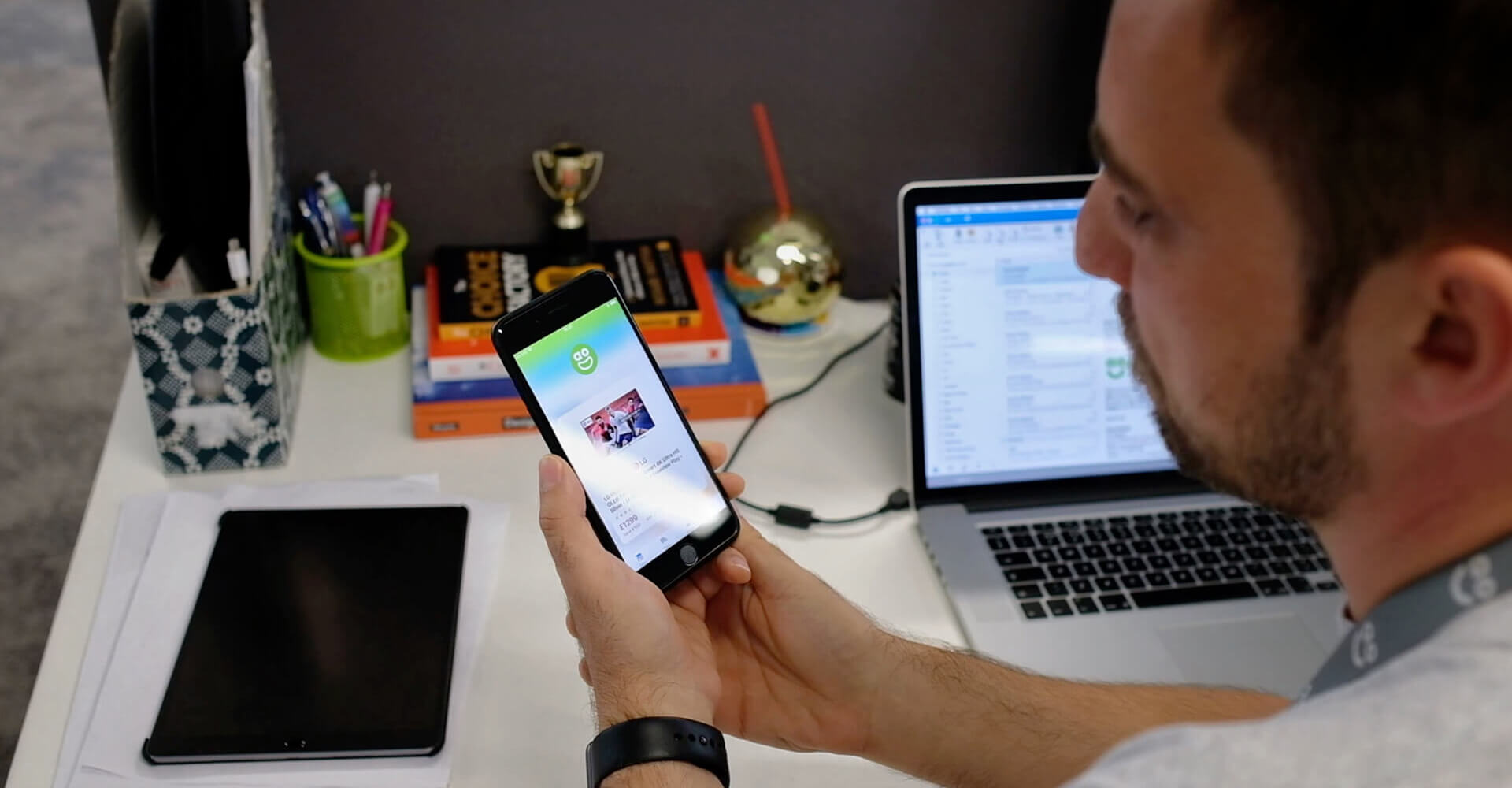 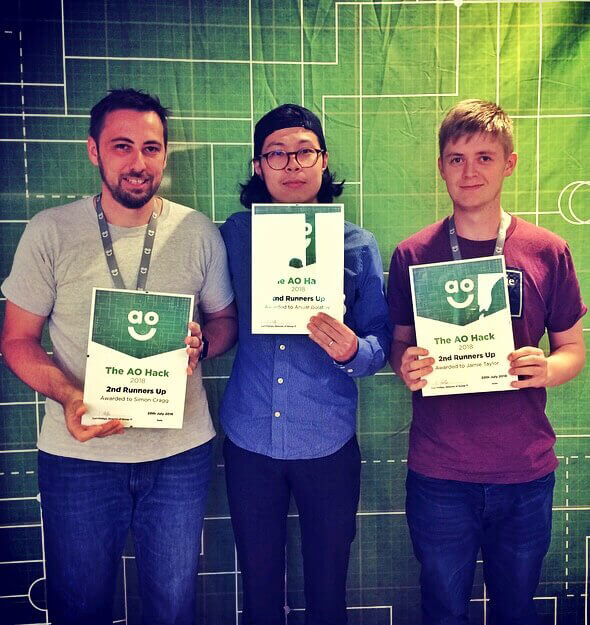 Second place at The AO Hack

Customer’s demand to get help in different ways have increased. We’ve observed that quite often customers were asking questions on Contact us page like “Can I speak to someone on live chat?”. Customer Support team wanted to accelerate operations with minimum effort and reduce cost by saving time for agents.

Abigail testing AO Assistant, it helps her to contact a manufacturer

I conducted competitors analysis. I evaluated usability of competitors using Heuristic evaluation method. To map the users' journey I used behaviour analytics tool called ContentSquare. That tool also helped me to understand how the page performs.

To get better understanding of users needs I was actively listening to customers at the call centre. I’ve learned that usually customers don’t want to call for support and they don’t like being put on hold and waiting while an agent helps them. People prefer to resolve issues themselves if self-help tools provided.

Looking at search queries on the page showed me what people are looking for. I also got a list of queries that customer support collects from phone and email conversations. Search queries and questions that people ask during calls highlighted vital topics that people are interested more. I categorised all needs into three main categories – people want to know more about delivery, they are interested to save money, and they need to contact a manufacturer, e.g. if their appliance is faulty. 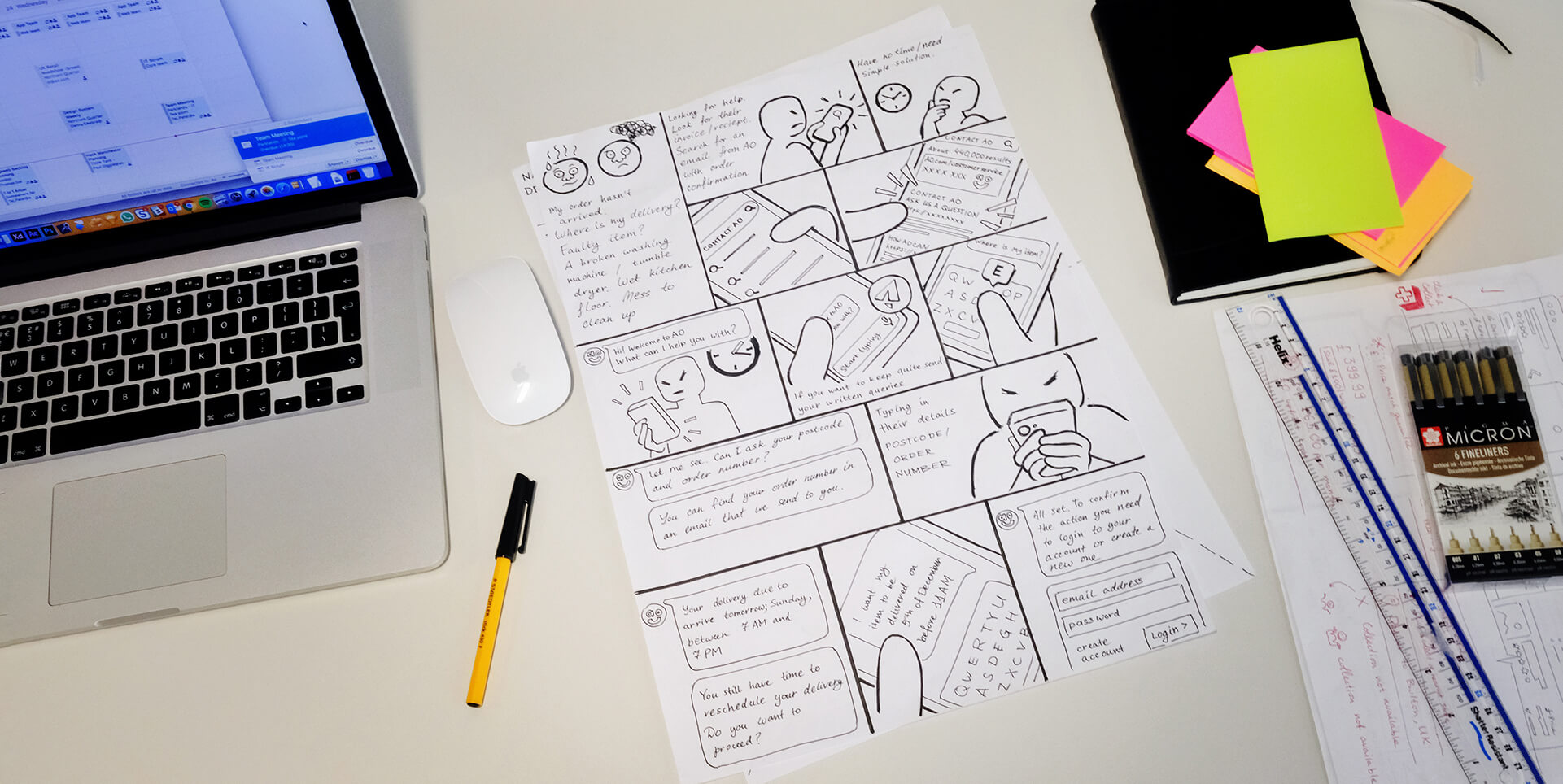 An average number of times people viewed Contact us page during a visit was 1.15, which means that people saw this page as the last step in their journey. Also, the average time spent on the page was much higher comparing to other pages.

Performance analysis showed that Contact us page receives over 40,000 visits a month and Customer Support gets around 12,000 calls just from that page. Majority of these calls agents generate into sales though, however many of them could be resolved automatically. 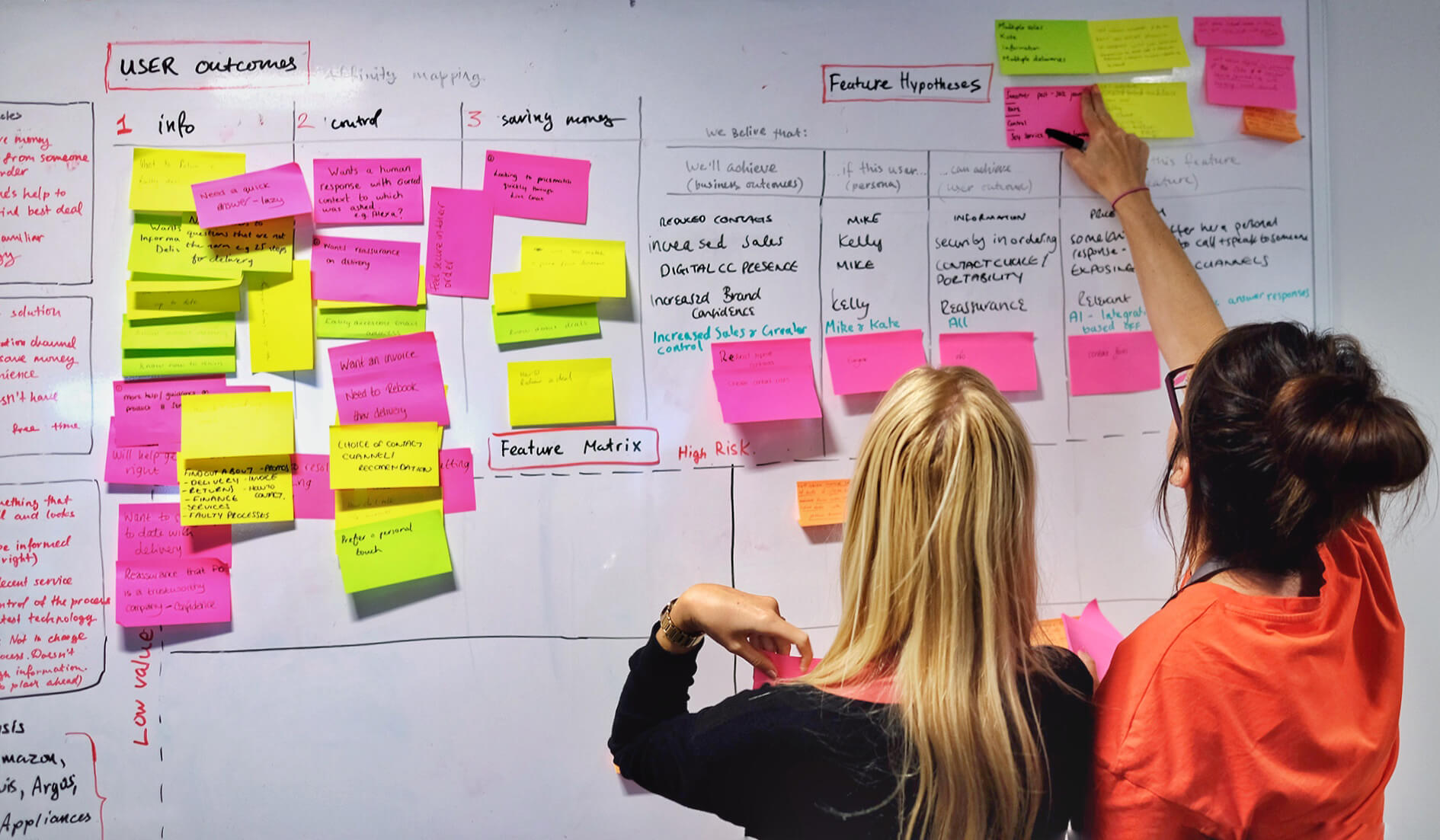 I involved the stakeholders in the early stages of the design process, as well as developers and copywriters through workshops and regular playbacks. I’ve run discovery, ideation and design workshops. During the ideation session, we had a brilliant idea to notify users on the page about events that might affect deliveries, e.g. harsh weather conditions that can disrupt the delivery.

Collaboratively with the team, we drew few personas based on our findings. This gave us a shared understanding of who are the users and what are their needs, and the obstacles they face.

After creating personas, we made assumptions about what users were trying to do based on behaviour analytics data. The data collected by me helped the team understand what customers were saying. We learnt that people want to be informed, they want to do things on their terms and they want to save themselves some money.

After getting an understanding of who the users are, what are their needs, and what we wanted to achieve, we prioritised a list of feature hypotheses. We filtered ideas by voting and using the feature matrix method. By the end of the workshop, we had a list of useful features that we could test.

Then I invited everyone to a workshop where we had a chance to sketch out their ideas and share them with others. Then at the end of this session, we discussed the sketches and voted for the best ideas. This exercise allowed me to gather draft wireframes that I later refined and used to produce testable prototypes. 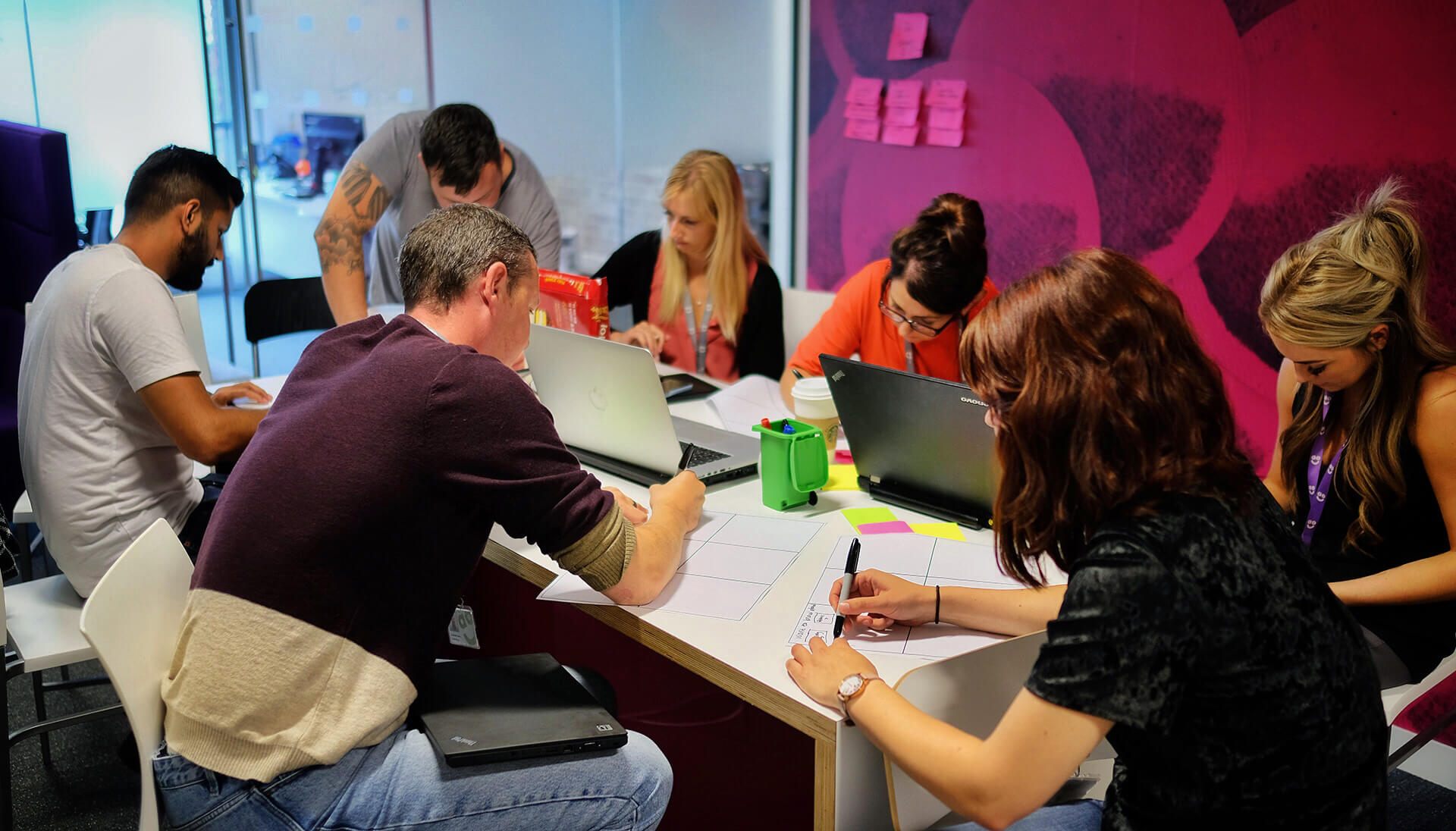 Teamwork matters when it comes to design 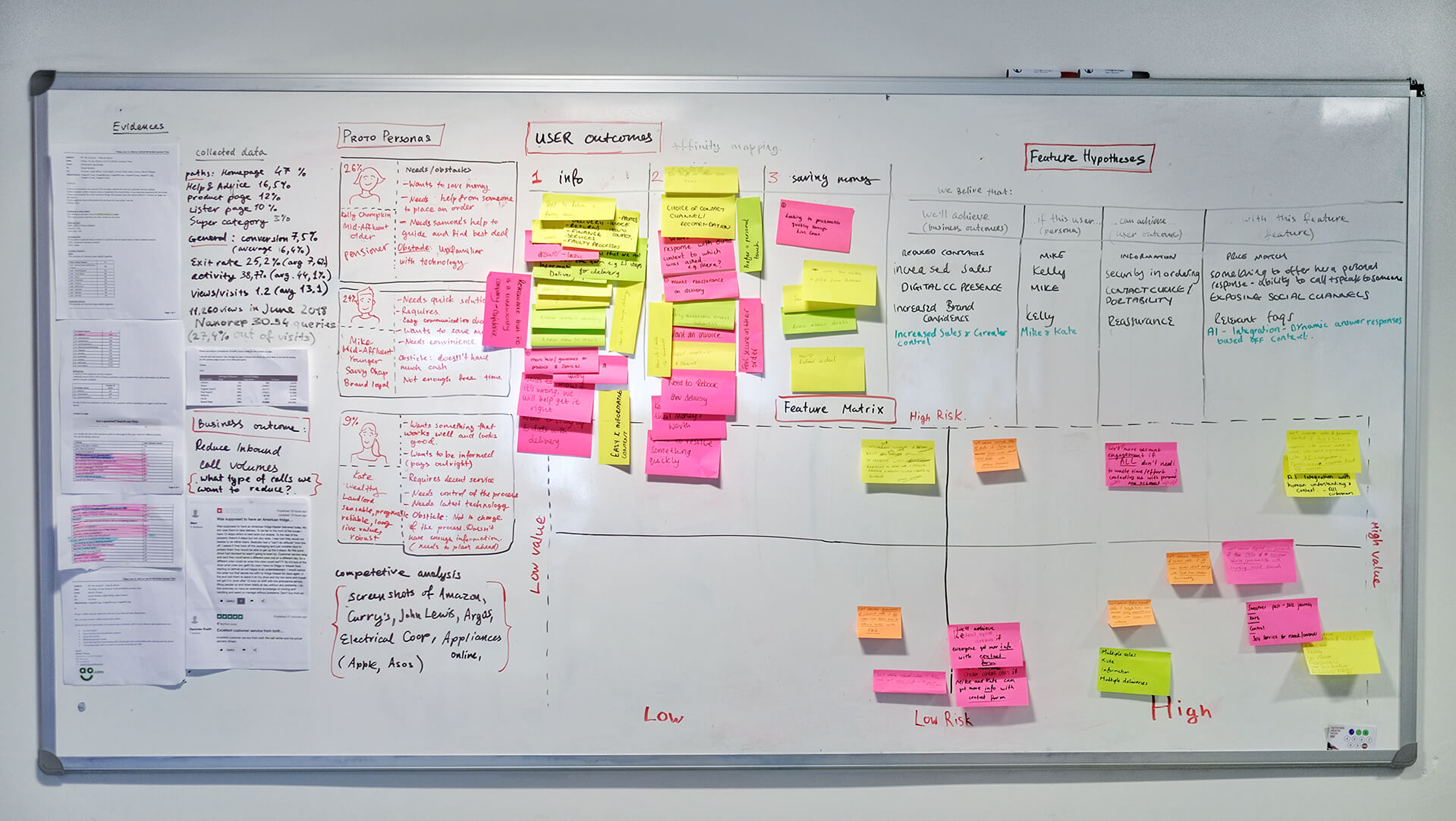 We dropped the mailing address from the Contact us page because only around 12 people sent letters by post per month to customer support. This form of communication was very slow and not cost effective.

We split the project into smaller lightweight releases, this allowed us to avoid big mistakes, learn and iterate more often. Since launching the new version, the number of calls to customer support has decreased by 1.5%, saving the company extra money.

We observed that customers were very happy to interact with chatbot. The chatbot on the Contact us page allows users find answers to their questions more efficiently, troubleshoot order-related issues and reduces the need to call customer support.

For confidentiality reasons, I have omitted the actual metrics.

A helpdesk software used by customer support agents and managers 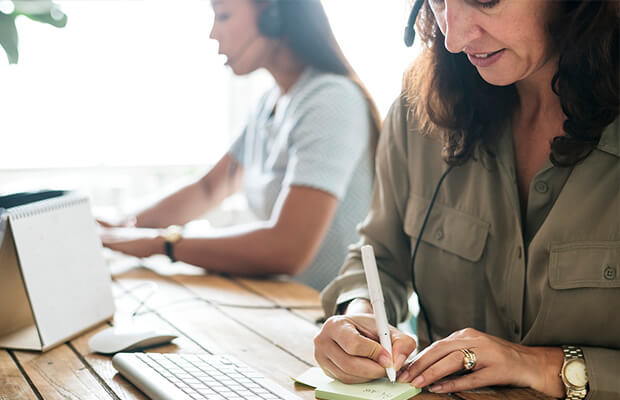